Yesterday was a tiring day. We got up at 440 to get everything ready to self-disembark Queen Mary 2, waited almost an hour from when they told us to be in the queens room before we were told to get in the already formed queue that was midship, dragged our suitcases another 20 minutes through that queue and then walked our luggage off the ship.

Taxi line was slow going, as the taxi supply had already been exhausted, and new taxis were coming in at a trickle. Luckily, we managed into a van taxi, as 4 suitcases, 2 backpacks and 2 people may have had some issues in the smaller sedans. The taxi driver nearly hit a woman who was crossed the road in a no pedestrian zone and was quite mad for a good part of the 5 minute drive.

Got to Southampton central and went to collect My already purchased train tickets, but the machine would not recognize the card i had purchased the tickets on…after 3 failed attempts, i went to a different machine and had no issues with that one. It was cool on platform 1 as we waited for the train, but for the most part, people were pleasant.

On the train…it was difficult to manage the baggage, I finally ended up moving one into a seat with the other on the floor below it, and our backpacks on top. That way we were able to have footroom and we weren’t blocking the snack/drink trolley. (Also, E can’t actually lift any of the suitcases substantially, so I had to help her get them on the train, into place, out of place and the gentleman in front of us helped her lift them off the train…she can pull them fine but lifting is difficult)

Once off the train at Waterloo…I made a spectacle of myself trying to get through the gate, I scanned my ticket to the machine at the wrong side of the wide gate, and the narrow gate I managed closed on and would not let go of my second suitcase. Then E’s Ticket refused to read. So I used her one day pass to get her through. (It was only good for yesterday and we were too tired to use it anyway).

Taxi driver, Tracy,  was pleasant on way to Woolwich, quite chatty…even showed us where she was married along the way.  Saw a lot of pretty areas as we drove and enjoyed the drive immensely.

Arrived at the concierge to our property, where we were to meet Holly. Waited almost half an hour for her, even though I’d done everything to keep her apprised of our whereabouts. I’d told her when we were 40 minutes away, and we arrived 41 minutes later. People in theconcierge office were pleasant, and the couch was an inviting change while we waited.

Got to apartment, had to pull luggage through large areas of pea gravel, had to carry suitcases up 8 small sets (8-10 steps) of stairs. Holly wondered why I didn’t make E carry hers up. Got shown around apartment, and wished a good visit before Holly left us.

I unpacked us, and E helped me put away the piles of her stuff,  we are only using about 2 suitcases of the 4 worth of stuff at this  point, but the rooms are well appointed and have plenty of room for things to be comfortable.

We were going to walk to KFC, but ended up finding the tesco express, grabbed a handful of groceries, and walked back to the flat (all without GPS).

Made dinner, while E played on the Xbox. Had a pleasant evening, and ended up turning in somewhat early because I was exhausted (E wasn’t tired, and wasn’t impressed that I made her go to bed at 10)

She read a while while I slept, but woke me an hour or 2 later when she heard a crash downstairs (I think she was hearing noises from outdoors, as we had all windows open). I slept hard and am waiting now for her to wake so that we can explore.

We have a delivery coming between 1:30 and 2:30…logistics for that have been a chore! Hope you have a great day! 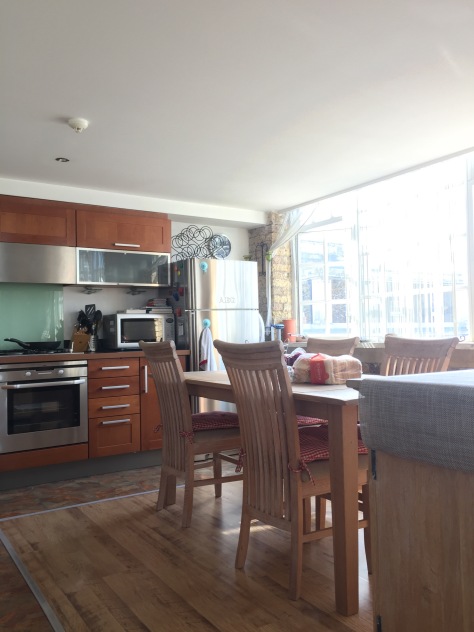 One thought on “Good morning from Woolwich”

This is a text widget. The Text Widget allows you to add text or HTML to your sidebar. You can use a text widget to display text, links, images, HTML, or a combination of these. Edit them in the Widget section of the Customizer.
Loading Comments...
%d bloggers like this: