The time on my phone currently says it is 451 am, it’s been bright daylight here for more than an hour, and I’ve struggled to try to sleep at all over the course of the night, the cabin air is too dry and is messing with my sinuses, and it’s far too cold outside to leave the door open for very long. It’s 41 degrees but the natural wind mixed with more breeze caused by the ships movement  makes it feel far cooler out there.

We have ridden fairly close to the coast until now, but last night around 9, we pulled away and started to cut towards the UK somewhere around 9 last night, from my understanding, just a bit north of the titánics final resting place.

I’ve been limited a bit more than anticipated on my activities thus far, as E does not like the crowds, I’m not allowed to leave her in the room unattended, and she is adamant that she does not wish to attend the children’s programming on board. Yesterday we reached a breaking point in that impasse, as we needed to be out of the room for the steward to tidy up, and she wasn’t interested in any of the options for lunch. I reached my limit after attempting 4 different options, 2 of them twice, and she would not be pleased. (The meal options in the main dining room were not anything I would have liked either, in her defense, and there was no seating in the pub, barring being seated with a woman who had taken the entire table up with her fish and chips).

Cross words were said and a threat of an entire day with the children’s program came out. many tears were shed and a nap (but still no lunch) was taken by both of us when we returned to our room.

Today we will be going earlier to the pub to wait for the 11:30 lunch time. Today we will be exploring more than just the shops and the outer decks. I think the breaking point needed to be there.

Last nights dinner was pleasant, Nothing extraordinary or special, just a chatty meal with E and me, and our 8 older, British table mates. Margaret hopes we will set E next to her husband, Joe…as she is determined that he can get E to actually talk (though Ted asked her quite a few questions 2 nights ago, and Arthur was quite chatty with her last night) it was our second formal night, and everyone looked lovely.

We saw a small pod of dolphins spy hopping as we got ready for dinner last night, they were only there for a brief moment before we were so far past them that we could not see them anymore. E has been looking for them and whales since we set out, so we were pleased to see them.

I’m hungry and breakfast isn’t for another 2 hours. E is still asleep, and I’m unable to even try. I’m glad to see a clear morning this morning as the fog was thicker than I’ve seen in quite some time last night, for most of the night.

Here is hoping for a pleasant day, with many adventures. We seem to be on the cusp of the North Atlantic and the Mediterranean Sea, per the map. I will check in more later.

(I do need to say that though I write of our butting heads, it was a short lived episode, and it rarely happens with us, I believe tempers were a bit shorter for many reasons, and neither of us was more at fault than the other). 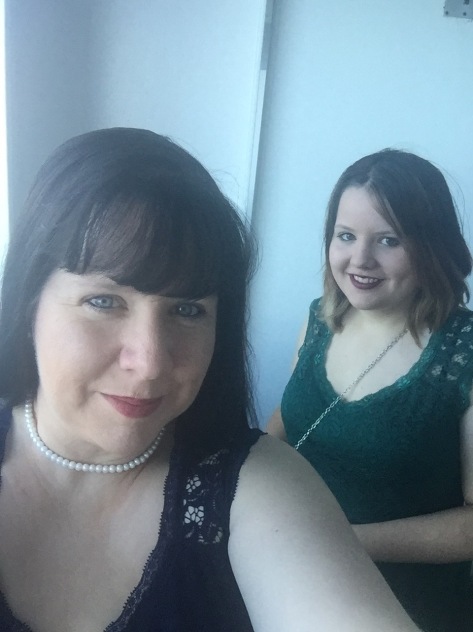 One thought on “Early Sunday Morning”

This is a text widget. The Text Widget allows you to add text or HTML to your sidebar. You can use a text widget to display text, links, images, HTML, or a combination of these. Edit them in the Widget section of the Customizer.
%d bloggers like this: